Lately I've been sewing and not knitting. I've been feeling this shift for a while now, not really being "in" to my knitting. I'll be at my weekly knit night, and someone will comment that I've hardly knit at all, just been sitting there enjoying the conversation. This, I should point out, is never actually judged upon at my group, and even if it was, what would I care? No, sometimes it's just nice to sit and not do anything, just enjoy the conversations and partake a little in them yourself.

But, to get back to sewing... I've been making a crib blanket for Z. I had this idea quite early on after having him. I had quite a few new receiving blankets, presents via baby showers, that just weren't quite big enough for what I tend to use receiving blankets for (covers for his crib mattress, covers for his changing pad) and too lovely and fleecy for the other common use (burping pad!). So, I had this idea to use them as sort of really big fat quarters to make a quilt from. When I had this idea the weather was just starting to get colder and I thought, perfect, I can make two and use one in the crib, and one as a stroller blanket. Well, as nice as it is to think that I would get straight to work and a quilt would just appear, these were not the old days of having entire days to myself to sew away. Babies keep you busy, and sleep deprived, and I was well aware that I didn't want to be cutting fabric while sleep deprived (hello? recipe for disaster!) especially as I was essentially making a quilt from "free" fabric and didn't want to ruin it beyond repair. Oh, I should mention that I had just the right sized piece of left over batting from another project... see? free! 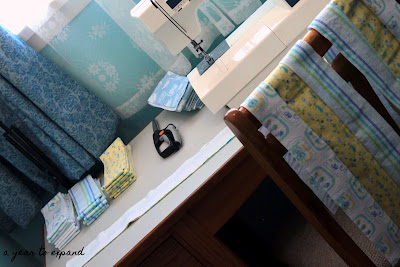 So, I went easy of myself (something I've learned to be better at since becoming a momma), chose the moments when I really felt like working on it. Over the months, I came up with a design, something simple yet different enough to be a bit of a challenge (humph... should have left it at plain simple). I decided to do plain stripes of alternating three fabrics, no sashing, with the binding done in a fourth fabric. I made things a little more interesting by placing the fabrics on a slight diagonal. This is what actually gave me the most grief, or challenge, however you decide to place your perspective. Being the perfectionist that I am, although I tried to approach this quilt sans hardfast plans, more of an improvised and quick-sew, if you will, the diagonal slant created challenges with the length of the fabric strips being inadequate (or at least not generous) and so I found myself ripping out seams and re-placing the strips to get the optimal coverage. Oh, how that is me to a tee! We must optimize!! More like cue swearing. 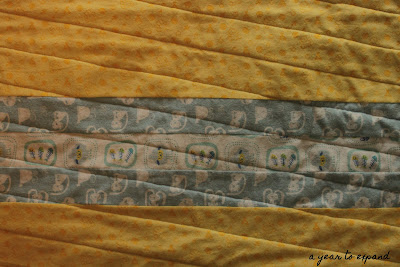 Plus, let's be honest, there is tension when things are slightly off the horizontal.
You constantly feel like your head's not on straight.

I found the backing fabric (I hadn't planned that far ahead initially... see? improvise!) at a local fundrasing rummage sale (Grandmothers for Africa). It was an oddly shaped piece, but fleecy and the right colour, and I think I bought it for a couple bucks (definitely the right price). I made it work by placing a striped panel (not on a diagonal, thank you very much!) partway down the back. That made me feel special, as I'd admired that style on numerous other quilts... kindof gives extra interest. 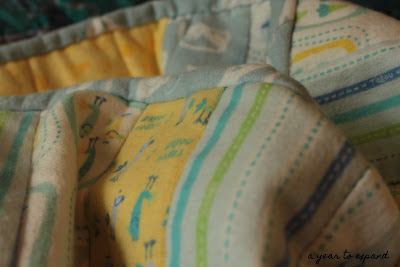 Now, I am working on the binding. This is my second time binding a quilt, and the first time using a separate fabric, not just wrapping the backing around. The lady we bought our house from left me her craft supplies and stash of crafting books (you should have heard me when I opened that box!), included in was Singer: Quilting By Machine, something I turn to whenever I make a quilt as there is always something I need a refresher on or have never done before. I've chosen to machine sew the binding on the front, but hand-stitch it on the back, as I like the idea of the stitches being invisible. So far, one long side is entirely done, and the opposite long side has been machine stitched. It's great work for tv watching (or sitting with friends or on the patio). I've chosen to do the invisible ladder stitch, which you can find a tutorial for here. My progress is by no means fast, though I'm sortof enjoying that at the moment... taking my time with the very last step of this quit. I've decided that this will be Z's daycare quilt. I'm going to place it in his crib for the month of August (or whenever I manage to finish it) so that it can take on the scent of his room, and hopefully it'll give him some familiarity and comfort when he starts daycare in the fall.