My garden, my oasis

Time to get a new post up! The weather has been great (well, at least better), so I've been out in the garden a lot more, taking advantage of the clear weather to tidy up and pull some weeds. Well, actually, a LOT of weeds. Every day I look out at my backyard through my kitchen window and see more of those blasted yellow dandelion flowers! I have half a mind to go into the dandelion greens business, because no matter how many I pull out, my yard still seems prolific! 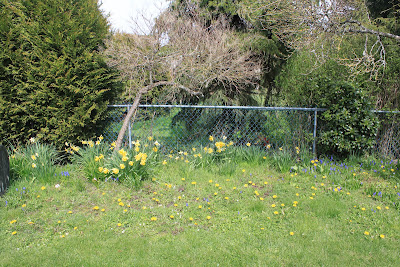 daffodils and dandelions!
On nice evenings, I've taken to working for an hour or so, pulling out a bucket full of dandelions. Here's the size of my bucket, and here's my haul of dandelions so far. They're on a tarp because I'm going to take them to the Saanich Works, where THEY can compost them (the little buggers aren't getting into MY compost - no way!). I also have some invasive species that I've been working on controlling (without pesticides, just by hand): morning glory, ivy, holly (at least the holly is easy to see), and, most recently, violets. 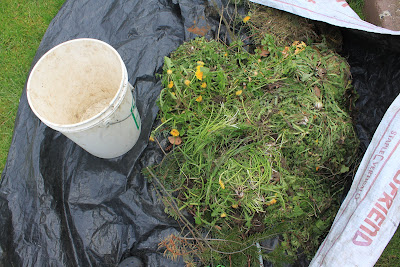 my bucket and my dandelion haul... so far 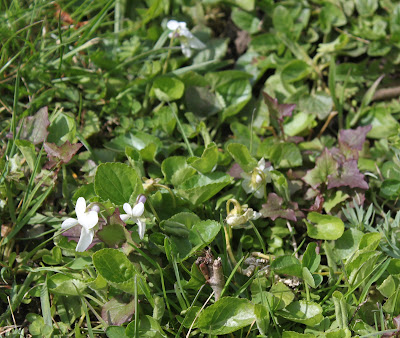 violets... ugh
I recently cleared a back patch of my backyard of flowers (I don't know what they're called, but they are also prolific and self seed themselves into the lawn... I made the executive decision that they were spreading too far, so out they came!), and a couple weeks later rhubarb came up in their place! I had never had rhubarb in that particular corner (I have some in another corner) and have absolutely no idea how it got there. 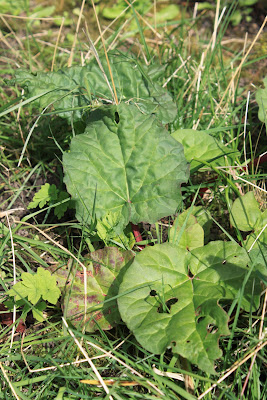 cute little rhubarb plant!
Although I'm not a fan of picking weeds, it's still been really nice to get out in my garden and work away without thinking about time or other commitments; it's definitely a meditative sort of activity, though it wrecks havoc on my neck and back sometimes. I'm going to end this post with two nice pics from my garden, one of a sweet smelling hyacinth that just bloomed, and another of my favorite part of my garden - the side walk. There's something so lovely about a path down the side of a house that has flowers on either side. Even with all the weed pulling I have left to do (which is completely my own choice), I am so looking forward to the coming weeks and watching my garden come to life! 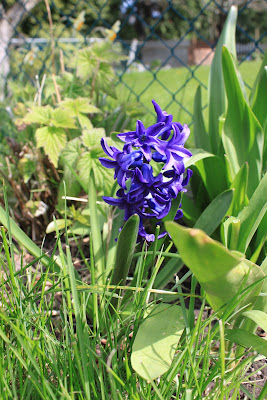 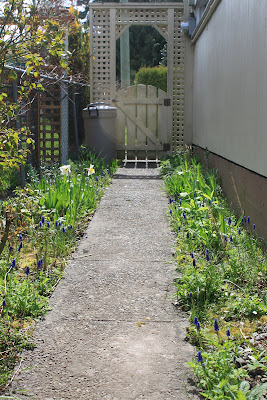