I feel like I should make one of those graphs that xkcd does so well showing the correlation between the increase of sunny days and decrease of my posts. For all you mathies out there, we call that an inverse relation.Okay, now I've distracted myself catching up on my xkcd cartoons. This one is particularly cool. Anyways...

Little boy Z has been eating more and more solids. He's 8.5 months old now, finally sleeping through the night (yay, sleep training!), and making these new little high pitched sounds whenever he seems to be having fun, which is quite often. I decided quite early on that I wanted to try and make most of Z's baby food. Every now and then I buy the premade stuff, but I figure he doesn't eat much, so it shouldn't be that hard. So far, I've made and frozen little cubes of mango (they were on sale by the case), pear puree, and sweet potatoe. That isn't all he eats, though I will confess that I have created many a meal with variations of those three ingredients, as well as baby cereal.

I don't feel him baby cereal anymore, because I think it was bunging him up (even the barley), but he has cheerios daily (they're just so much fun to grab with little fingers!). I try to feed him other foods high in iron, and I figure he still gets quite a bit of iron through the good ol breast milk. Apparently iron through breast milk is more easily absorbed as well. It's at this point I always check myself and ask, wait... absorb or adsorb? Stupid chemistry degree :P

Z loves normal adult foods as well. He could be stuffed full, but if you start eating something in front of him he will flail and reach out his arms with this expression that says "oooo!!! pick me!!" It's pretty cute, and usually results in me letting him try whatever I'm having, except for the obvious potential anaphylactic shock inducing foods and those super high in sugar or salt (no ice cream for you!). PS the way I originally tried to spell anaphylactic had the autocorrect suggesting "anticlimactic"... not cool autocorrect, not cool.

I made brown lentil soup the other day, well, actually three days ago. That's one of the things I love about soup. You can make one huge pot and it lasts for days! Anyways, it turned out really yummy.

I sauteed an onion and some celery, added spices to the sauteed savories (most spices are fat soluble, so it's best to add them before adding the stock) - I used garlic powder (I was out of fresh), ginger, cumin and coriander. Then, I added some roughly chopped carrots and the lentils. Covered that baby up with some water (I think I made it up to 4L), added my chicken and veggie stock paste (I had just enough left of the two) and a can of diced tomatoes. I hand blended it after about 30-45 minutes. Z loved it mixed with a cube of yam, so now I'm freezing the rest of it in my ice cube tray :)

And now, to finish with some gardening picks. The warm weather has coaxed out my tulips and my welsh poppies are just starting to pop! 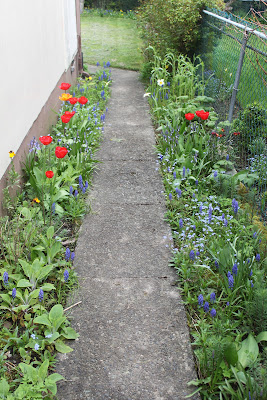 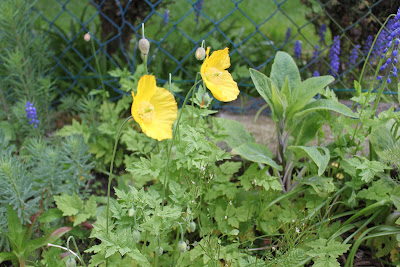