I've had a lot of thoughts swirling around in my brain that I've been tempted to share here, though I've hesitated for many reasons. Timing, fear of sticking my neck out too far or perhaps standing on my soapbox to a crowd of none, these have held me back. But, right now I'm sitting in a Biology 12 class I'm covering for a friend, the students are working away in groups, and I find my brain resting on the topic of science.

Oh, science... I love science. I have a chemistry and math degree, and I have always loved science. I remember thinking throughout school that scientists were pretty cool. And, of course, my idea of a career in science involved visions of tromping around in nature checking out ecosystems and newts, or perhaps wearing a lab coat and developing a new form of energy, or maybe being an astronaut out in space. So, while I'm thinking these thoughts, blissed out on the fun of learning science for the heck of it, I think about articles I've read lately (and some from a few years back). Articles talking about Federal cuts resulting in loss of jobs for scientists, and muzzling of scientists. Locally, we had the recent closure of The Centre of the Universe, which has done science outreach to local schools for years, but, you know, hasn't been making any money.

I remember reading somewhere that the Harper government was only interested in supporting science that resulted in economic growth. Not sure if I can find the article, but I remember thinking, boy, that's short sighted. How often have I read or heard of scientific discoveries that came about from mucking around, or trying things for the heck of it. Stumbling upon a realization through trial and error or taking a fresh look at the picture. Yes, technology is important and extremely useful, and progress in science can be directed to an extent through specific funding and support, but science for the sake of science is what really gets us somewhere.
﻿﻿﻿
﻿﻿ 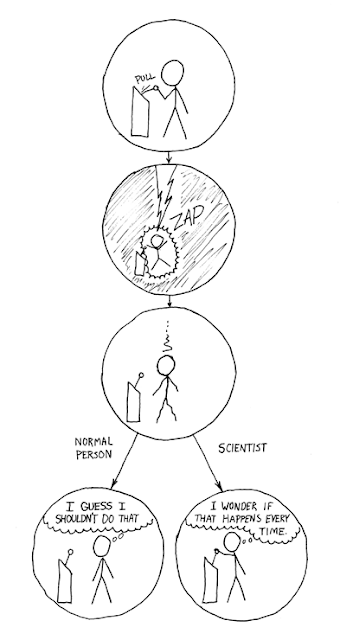 So, while I sit here overseeing this Biology class, here's what I think: through all of these actions, we are telling kids in schools today something. We are telling them that instead of being led by their curiosity and passion, they need to be led by the economy. In essence, there are only certain fields of science that are lucrative, that are worth it, so those are the only ones you should learn. How messed up is that? Don't get me wrong, sooner or later you need to be able to sustain yourself as an individual and make a living, so to speak. Keeping sight of the economy and trends in job availability, etc, can be important. But, I also believe that if we value something, we will make it valuable. If we value science, truely, and the importance that it plays in our development as a society, and in our understanding and interaction with the world around us, then we won't just think about it as a lucrative tool.

I call bullshit, Harper. I hope to still pass my passion for science on to my students. Hopefully, there are still avenues for these passions to exist, other than teaching.